Amyotrophic lateral sclerosis (ALS, the most common of the motor neuron diseases, MND) is a devastating disease for those affected and their family members. It is an adult-onset, rapidly progressive neurodegenerative disorder that leads to paralysis and death, typically within 2 to 5 years of first symptoms. To date, the most important fundamental insights into the underlying cellular mechanisms have resulted from studies of the known causal mutations. However, >85% of cases do not harbour known ALS mutations and application of new genomics methods is acknowledged as the strategy most likely to drive progress in unlocking the remaining molecular variations that cause and contribute to the disease. This is necessary if we are to address the desperate need for better diagnosis, prognosis and treatment of ALS. We aim to discover genes and functional pathways that contribute to ALS pathogenesis and progression by exploiting genome-wide genetic and epigenetic profiling methods. To achieve these aims we have established the Sporadic ALS Australia Systems Genomics Consortium (SALSA-SGC) funded by the Ice Bucket Challenge Grant administered by MNDRIA.

In August 2014 the Ice Bucket Challenge for ALS went viral on social media, raising both awareness and money for ALS. In Australia over $2M was raised, about half donated for research. The over $1M raised in Australia for research was processed through the MND Research Institute of Australia (MNDRIA) who called for applications that focussed on sporadic ALS, focussed on research in humans and were nationally and internationally collaborative – and so the Sporadic ALS Australia Systems Genomics Consortium (SALSA-SGC) was established.

SALSA-SGC brings together established ALS researchers, ALS research clinicians and researchers new to ALS with expertise in analysis of genomics big data. The logistics of establishing SALSA-SGC is masterminded by Anjali Henders. The consortium is led by Professor Naomi Wray, from the University of Queensland and Associate Professor Ian Blair, from Macquarie University, NSW. 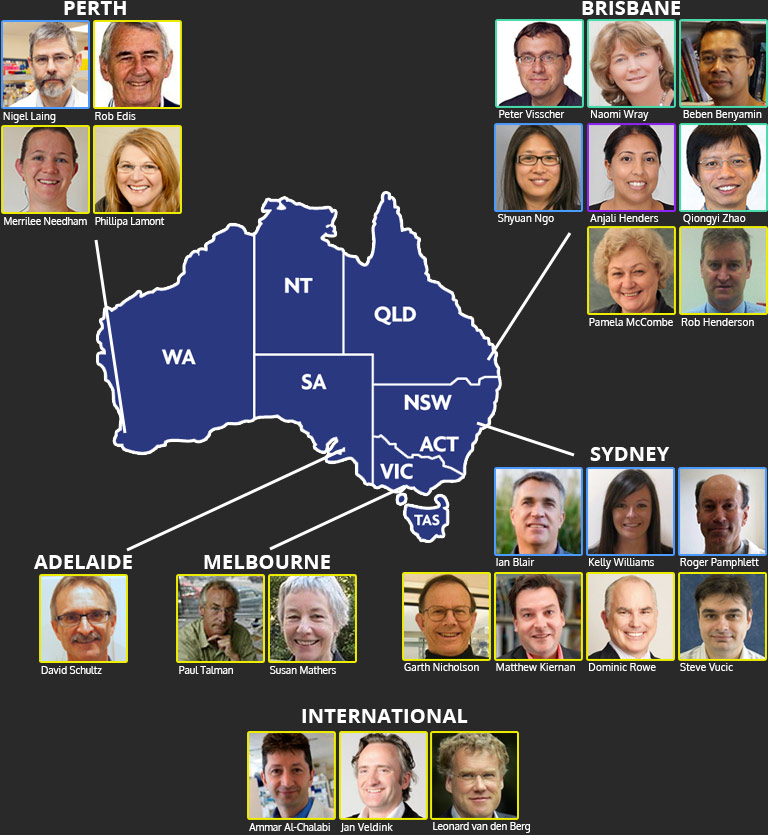 Current understanding of ALS is almost entirely driven by investigation of genes identified from the small number of families presenting with multiple affected members (so-called familial ALS or fALS). However, for the vast majority of people ALS strikes ‘out of the blue’ with no known family history (so-called sporadic ALS of sALS). It is likely that a complex interplay of genetic and non-genetic factors underpin sALS, making it a so-called “complex disease”. The last five years have seen dramatic advances in technology that allow exploration the human genome in ways that weren’t previously possible, but require international collaboration to maximise discovery. These advances are contributing to a new way of thinking about the future of medicine, called personalised or precision medicine.

What is systems genomics?

Will genomics give the answers we need to find the cure for ALS?